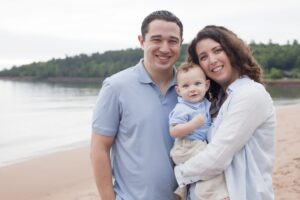 Tony Ruiz was born in Dearborn, MI. While a freshman at Albion College he fell in love with his now wife, Nicole. It just so happened that Nicole was born and raised in Marquette. After graduating from Albion College with a major in Political Science and Economics, he attended Wayne State University Law School and earned his juris doctorate.

While at Wayne State, Tony, was active in the Free Legal Aid Clinic, Inc. (FLAC), where he helped indigent individuals with there family law matters. In addition, to working at FLAC, Tony clerked in the Wayne County Prosecutor’s office.

After graduating from Law School, Tony partnered with a classmate to open their own legal practice specializing in criminal defense and family law. Soon after Tony joined Rettig, Rademacher, Clark, Bray & Cameron, P.C. in Escanaba where he specialized in protecting workers rights in Worker’s Compensation matters.

In addition to his extensive legal experience, Tony has been an active member of his community previously serving on both the Escanaba City Board of Zoning and the Escanaba Planning Commission.

Send Us A Message

very good to help deal with the traffic ticket waiving all points and dines. Related